£45.5m investment to unlock homes in Leicestershire and South-East

Highways England has announced a number of road improvements schemes worth £45 million that could create more than 6,000 jobs and 10,000 homes in Leicestershire and the South East.

The body is making a £19.9 million contribution towards the schemes from its Growth and Housing Fund, which was set up as part of the government’s £15 billion investment in roads.

Private sector developer contributions, the Congestion Relief Fund and other public money make up the rest of the investment.

The three schemes that will receive money are:

M27 junction 9 Whitley Way – Up to 3,500 homes and up to 250 jobs could be delivered.£9.9 million will come from the Growth and Housing Fund and £3 million from the Highways England Congestion Relief Fund. Hampshire County Council and the local enterprise partnership will, under the terms of a grant funding agreement, deliver the scheme. It is the first scheme to be supported by this fund in the South-East.

Anstey Lane (A46 / A560) – Up to 2,378 homes and around 260 jobs could be delivered. Some £5 million will come from the Growth and Housing Fund and £2.8 million from private developers. Leicestershire County Council and the Leicester and Leicestershire Local Enterprise Partnership will deliver it.

M1 junction 23 – Up to 4,000 homes and 5,600 jobs could be created. Some £5 million will come from Growth and Housing Fund, £10 million from private funding and £3.2 million from the local growth fund. Leicestershire County Council and the Leicester and Leicestershire Local Enterprise Partnership will deliver the scheme.

Jim O’Sullivan, chief executive at Highways England, said: “England’s strategic roads are vital for economic success, connecting businesses, people and supporting the government’s agenda of employment and growth. All of these improvements and future upcoming announcements will ultimately ensure England’s major roads continue to make a valuable contribution to the prosperity of our country.”

So it looks like some of the money will come to the South Coast.

A couple of interesting articles from The Planing Portal news updates caught my eye this month.

The first about Brown Field Sites and the second about the lack of Local Plans from certain local planning authorities.

In a recent article, Laura Edgar from The Planner wrote:

The biggest opportunity arising from the government’s housing white paper is the proposal to release more publicly owned land for development, according to a survey of developers.

The top four most popular measures in the housing white paper were:

Increasing the availability of brownfield sites (69 per cent);
The proposed reduction in the time permitted by local authorities to approve planning applications from three to two years (49 per cent);
The continuation of the Help to Buy scheme (45 per cent); and
Increasing the focus on building more homes in the affordable housing sector (41 per cent).
Despite suggesting that they support elements of the housing white paper, developers have expressed scepticism that the government will meet its target to build a million homes by 2020. Just one in five (21 per cent) think this target is realistic.
The research also considered what property developers would like to see the government introduce to address the housing crisis. More than three-quarters (78 per cent) would like to see a repeal of the stamp duty rises and tax relief reductions on landlords; 44 per cent wanted to see incentives for elderly people to downsize, and 37 per cent called for a suspension in capital gains tax to encourage more land to come on to the market.

Keith Aldridge, founder and managing director at Amicus Property Finance, said: “Property developers appear highly supportive of a number of the ideas in the white paper, particularly releasing more brownfield land to the market and the greater focus on affordable housing. The existing ‘Help to Buy’ initiative has also been well received by many developers and we have already financed a number of successful developments in the South-East.

“Though large-scale government investment plays a part in stimulating supply, developers see the current tax laws as one of the biggest obstacles to solving the housing crisis, particularly repealing the recent stamp duty increases for landlords.”

Whether you like it or not, people need to live somewhere that is convenient for their work and family lives. We have all heard others say "I remember when all of this were fields." and similar comments, but the simple facts are that the population is rising and people need affordable housing.

However, in a further article, Laura Edgar also went on to write:

Report: 43 per cent of councils yet to publish draft local plan

New research has suggested that 36 per cent of planning authorities have seen a local plan through examination to adoption, but 43 per cent have not even published a draft local plan.


The report, by planning consultancy Lichfields, considers the progress of local plans under the National Planning Policy Framework (NPPF) since it was launched five years ago.

The inability of some councils to make progress with their local plans could expose them to government interventions announced in the housing white paper, the consultancy warned.

Planned and Deliver notes a number of policies included in the housing white paper that might have implications for plan making and delivering planned housing, such as the housing delivery test.

Statistics in the report

161 local plans examined or submitted for examination since the introduction of the NPPF
105 local plans found sound with 36 per cent of local planning authorities boasting an up-to-date local plan against the NPPF
30 per cent of sound plans subject to an ‘early review’, all related at least in part to housing matters
71 per cent of early reviews subject to a deadline or time limit, with eight local plan areas already missing that timescale
23 tools and tests Lichfields have identified within the housing white paper that could help improve plan-making
The research also suggests that in aggregate, adopted post-NPPF local plans, when combined with the London Plan, are not providing for sufficient housing to match the number of homes implied by household projections. The shortfall could be 3,945 dwellings per annum. This is without the consideration of improving affordability.

Lichfields said that with many plans yet to be prepared in locations with restrictive policies, including policies relating to the green belt, there is likely to be a need for upward pressure on housing requirement figures in emerging and next generation plans.

Matthew Spry, senior director of Lichfields and an advisor on the Department for Communities and Local Government Local Plans Expert Group in 2016, said: “As it has been from the beginning, the major factor slowing the local plan process is the debate and disagreement over housing numbers. Indeed, almost half of plans found sound have needed to adjust their housing targets before making the grade.

“Our research has identified 222 local authority areas (56 per cent) may fail these tests and face the consequences of needing an action plan or application of a 20 per cent buffer on their five year land supply.”

The government is currently legislating to make having a plan a statutory requirement. If a council does not have an up-to-date local plan, the government may intervene by directing a local planning authority to review its existing plans or directing councils to prepare a plan.

Spry said: “Despite some frenetic plan making activity over the past 12 months, our research shows that getting these plans to formal submission remains over the horizon for many areas.

“There are clear signs that the prospect of the housing white paper’s reforms has caused a hiatus, but with net housing completions reaching almost 190,000 last year despite poor plan coverage, it is perhaps better to apply one comprehensive set of reforms now, rather than have constant tinkering.”

Planned and Deliver can be found here (pdf).

* Lichfields formerly operated under the name Nathaniel Lichfield & Partners. The name Lichfields came into use on 14 February 2017.

This is very disappointing as clearly the latter will have an impact on the former, and without a clear local plan the population could be poorly served by both local authorities and developers.

Something to meditate on

Interesting article by Tom Evans (www.tomevans.co) from The Federation of Small Businesses' magazine First Voice on the importance of taking time to regroup, recharge the batteries and look after your mind and body. Life is a marathon, not a sprint. 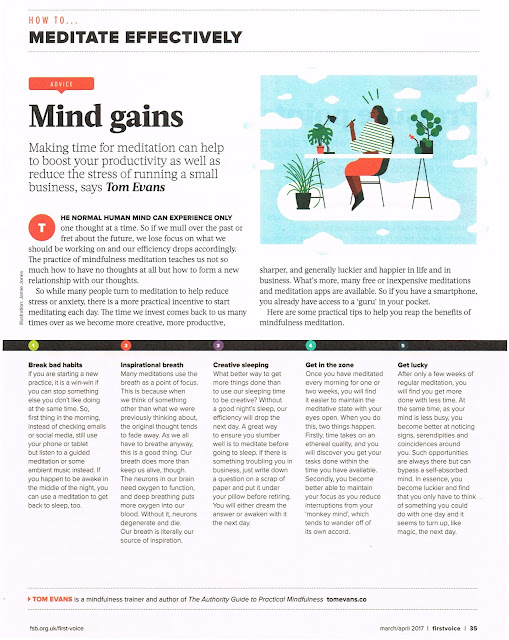 Over 40 Million Monthly Unique Users Nominated Best Home Building, Remodeling and Design Professionals in North America and Around the World

GBS Designs of Waterlooville, Hampshire has won “Best Of Customer Service” on Houzz®, the leading platform for home remodeling and design. The chartered architectural and design practice was chosen by the more than 40 million monthly unique users that comprise the Houzz community from among more than one million active home building, remodeling and design industry professionals. 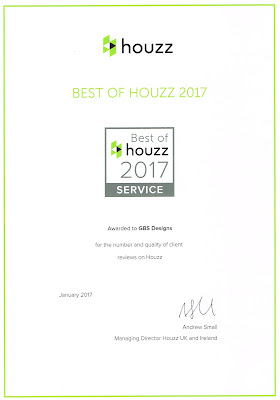 The Best Of Houzz is awarded annually in three categories: Design, Customer Service and Photography. Design award winners’ work was the most popular among the more than 40 million monthly users on Houzz. Customer Service honors are based on several factors, including the number and quality of client reviews a professional received in 2016. Architecture and interior design photographers whose images were most popular are recognized with the Photography award. A “Best Of Houzz 2017” badge will appear on winners’ profiles, as a sign of their commitment to excellence. These badges help homeowners identify popular and top-rated home professionals on Houzz.

“We’re so pleased to award Best of Houzz 2017 to this incredible group of talented and customer-focused professionals, including GBS Designs,” said Andrew Small, Managing Director of Houzz UK and Ireland. “Each of these businesses was singled out for recognition by our community of homeowners and design enthusiasts for helping to turn their home improvement dreams into reality.”

About Houzz
Houzz is the leading platform for home remodeling and design, providing people with everything they need to improve their homes from start to finish – online or from a mobile device. From decorating a small room to building a custom home and everything in between, Houzz connects millions of homeowners, home design enthusiasts and home improvement professionals across the country and around the world. With the largest residential design database in the world and a vibrant community empowered by technology, Houzz is the easiest way for people to find inspiration, get advice, buy products and hire the professionals they need to help turn their ideas into reality. Headquartered in Palo Alto, CA, Houzz also has international offices in London, Berlin, Sydney, Moscow and Tokyo. Houzz and the Houzz logo are registered trademarks of Houzz Inc. worldwide. For more information, visit houzz.com.
Posted by Glenn Bramble-Stewart at 02:19 No comments: